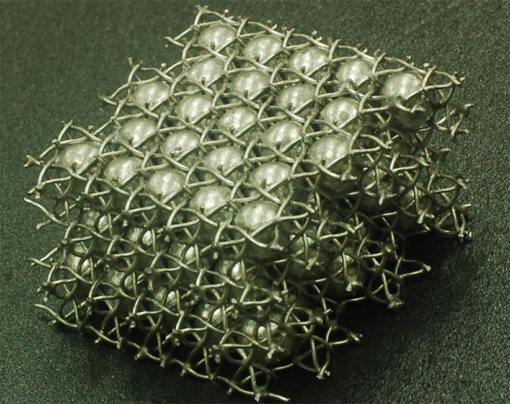 Cellular metals exhibit excellent specific strength and stiffness. They have multifunctional potential in areas such as aerospace and civil engineering. Honeycomb for example is widely used as a sandwich core material.

However, if the internal space is to be used for a secondary function such as heat dissipation, honeycomb is inadequate because of its closed-cell structure. Currently, trussed periodic cellular metals (PCMs) have gained attention since their mechanical properties are as good as honeycomb, and their open cell structures are easy to access for secondary functions.

Another secondary function is energy absorbing which can be applied by the addition of metal hollow spheres (MHSs). MHSs are hollow spheres with very thin walls that are produced using a powder metallurgical process. A broad cell size spectrum from 0.5 to 10 mm is possible whereas the cell size distribution is very narrow. The cell wall thickness can be varied from ~20 to 1000 µm.

The MHSs are highly suitable for a recently introduced technique to fabricate a multi-layered cellular metal called wire-woven bulk Kagome (WBK). In WBK Kagome truss-like structures are fabricated using helically-formed wires. Previous works revealed that WBK often fails by buckling of struts composing the WBK with undulation of the strength after an initial peak.

To enhance buckling resistance and to maximize deformation energy absorption, Ming-Zhen Li, Günter Stephani and Ki-Ju Kang propose a novel design, ‘WBK-MHS hybrids’, which consist of WBK consisting of MHSs in the internal space. Within this project Ming-Zhen Li and Ki-Ju Kang were the professionals in the field of Kagome and Günter Stephani was the metal hollow sphere expert. They performed compression tests to evaluate the performance of the WBK-MHS hybrids in comparison with competing materials.

The researchers fabricated WBK-MHS hybrids by assembling layer by layer helically-formed wires with MHS arrays. In the finished configuration, the MHSs are located in small tetrahedrons or octahedrons of the inner space of a WBK structure.

Li, Stephani and Kang found that the failure of the ordinary WBKs started by the buckling of struts in a certain layer, which led to the successive collapse of the layers. The hybrids whereas showed rather uniform deformation through the entire body. The MHSs penetrated into empty spaces in adjacent layers as compression proceeded. After the MHSs contacted one another, the specimen showed even higher resistance.

Thus, strut buckling was effectively suppressed and post-yield resistance kept increasing. The unique feature – a soft touch but steadily increasing resistance – would be desirable in many applications such as automobile bumpers.