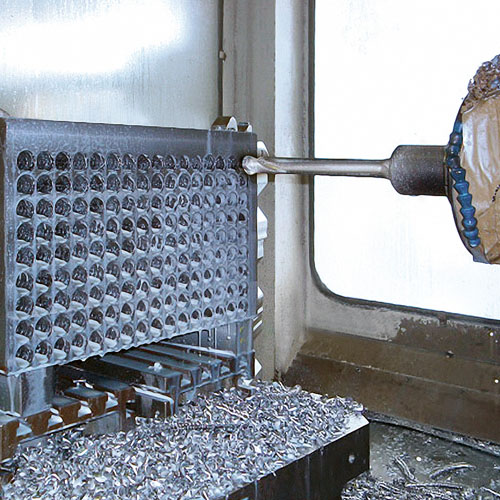 The key problems faced by many companies revolve around longer delivery times due to running up against capacity limits with simultaneous cost increases for raw materials and energy. On the other hand, new orders which exceed current capacity create new opportunities. Accordingly, companies are intensely focused on optimization of machines, tools and the materials to be machined, and are gaining advantages over their competitors in this manner.

While these have improved considerably during the past few years, and the differentiation between heat treated and as-cast materials was not taken into consideration until now, considerable performance potential when machining nodular cast iron continues to be wasted. Thus, tool manufacturer Kennametal agreed to determine optimum cutting parameters and service life of tools for various materials with professional equipment and methods.

Comparative statements by customers were confirmed by the investigations. Gontermann Peipers reported that the ferritic GOPAG C 500 F obtained the longest tool life in the tests. With 11% perlite content in short-cycle heat treated 400-15U EN-GJS, 15% higher tool wear was obtained than with a purely ferritic material. Customarily in the market, as cast materials contain up to 30% perlite, which increases tool wear by 40% or more.

The investigations show how the different materials affect cutting performance and there are apparent advantages in connection with cast material. The influence of the multiphase structure when considering the different grades of steel also reveals differences between C 45 E and Hyt 60. The high perlite content of more than 40%, in conjunction with the relatively high tensile strength in comparison with cast iron material, leads to a substantial reduction in performance during machining. The proof strength/tensile strength ratio of 0.6 to 0.8 is typical for castings. So both cast materials evidence comparable or better yield strengths and elongation values than the steels do.

The investigations have shown the influences originating from material selection and how the cutting parameters can change. If a company is able to boost its productivity by 20% through the selection of a better material and produce 60 components per shift instead of 50, according to Gontermann-Peipers’ calculations, costs will decline by 12% and gross profit will increase by 80%.