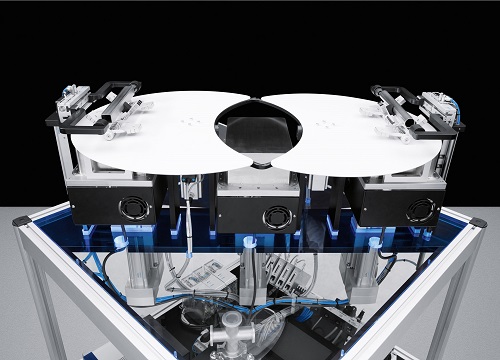 Superconductors are opening up possibilities for entirely new applications in automation technology. They allow contact-free, frictionless manipulation of objects and show great potential for process automation: Their dust- and abrasion-free operation is ideal for the protective transport of workpieces in highly clean environments, machines can be easily cleaned, and objects can even be moved from behind walls.

Superconductors are materials that, below a certain temperature, can freeze the field of a permanent magnet at a predefined distance and can thus hold it in suspension. The resulting air gap remains stable in any spatial position. By this means, objects can be stored contact-free without any control technology and be moved with a minimal expenditure of energy.

Superconducting systems are suitable for bigger loads and can even work through walls and in all spatial planes across their definable hover gap. This enables objects to be handled in protected and enclosed spaces or through cladding. Areas prone to contamination or which are difficult to clean can thus be protected using smooth and easy-to-clean surfaces. If non-magnetic substances penetrate the bearing, the bearing and guiding function is not impaired. This also allows use in particularly highly contaminated areas.

Now, Festo presents two innovative application concepts for superconductor technology. With the SupraGripper two grasping elements, each with three fingers, hover freely above two semicircular plates. This technology could enable objects to be grasped and transported within enclosed spaces – a practical solution for clean rooms or for working in liquids, gases or in vacuum.

The hovering effect is generated by three cryostats in all, which are installed beneath the plates and can be driven upwards or downwards. The grippers thus either hover above the plates or are set down onto them. In addition, the two plates can be rotated and positioned by means of two rotary drives, so that the two grippers can be transported from one cryostat to the next.

Furthermore, a round cryostat with superconductors is attached to the outside of each end of a liquid-filled glass tube. Inside the vertically oriented tube is a magnetic puck that is virtually tethered to the two cryostats with a levitation gap of around five millimetres and is initially suspended beneath the upper cryostat.

A magnetic ring surrounding the cryostats is set into rotation by means of a stepper motor, which transfers this motion to the suspended magnet. The magnet is repelled from the cryostat by an electrical impulse and drifts downwards in a spiral motion. At the lower end, it is captured once more and centred by the superconductor in the other cryostat.

After several years of intensive research work, Festo is cooperating with partners and customers to examine their ideas for specific applications. “We are now not merely showing impressive levitation effects and the opportunities offered by superconductor technology, but are actively discussing their potential together with the automation industry. We are currently working together with selected customers towards initiating our first pilot projects”, said Georg Berner, Head of Strategic Corporate Development.