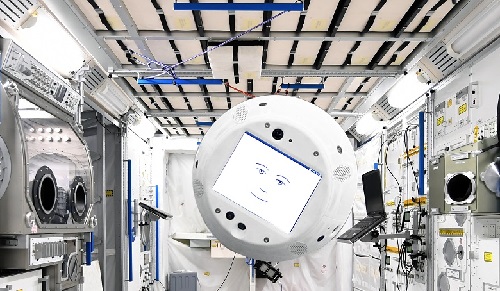 The Crew Interactive MObile companioN (CIMON) is able to see, hear, understand, speak – and fly. It is roughly spherical, has a diameter of 32 cm and weighs 5 kg.

From summer 2018, CIMON will become the new ‘crew member’ on the International Space Station (ISS), in order to demonstrate cooperation between humans and intelligent machines in the form of a technology experiment. The interactive astronaut assistant was developed and built by Airbus on behalf of the German Aerospace Center.

Watson AI technology from the IBM Cloud provides voice-controlled artificial intelligence. The human aspects of the assistance system were co-developed and supervised by scientists at Ludwig-Maximilian UniversityHospital in Munich. An approximately 50-strong DLR, Airbus, IBM and LMU project team has been working on implementing CIMON since August 2016. “CIMON is globally unique in this form,” summarises Christian Karrasch, CIMON Project Manager at the DLR Space Administration in Bonn. “We have implemented this experiment in a very short time. It is intended to show to what extent the astronauts’ work can be supported in the European Columbus module on the ISS and relieve them, in particular, of routine tasks. Ideally, the astronauts could use their time better and more effectively. With CIMON, we are entering new territory and operating at the threshold of technological feasibility.”

CIMON allows the astronaut to keep both hands free, with no need to manually operate a computer, for example. Thanks to this fully voice-controlled access to documents and media, the astronaut can conveniently navigate through operating and repair instructions and procedures for experiments and equipment. CIMON will thus serve as a complex database of all the necessary information for working on the ISS, and can also be used as a mobile camera for documentation purposes.

When making its space debut, however, the intelligent artificial assistant will not have all the capabilities envisaged by its developers: “In the medium-term, we want to concentrate on group effects that develop in small teams over a long period of time and can occur during long-term missions to the Moon and Mars. Social interaction between humans and machines, and between astronauts and emotionally intelligent flight attendants could play an important role in the success of these missions,” explains Till Eisenberg, CIMON project lead at Airbus Friedrichshafen. The engineers are also interested in processing Big Data and data mining.

“The aim of the CIMON project is to examine the current capabilities of artificial intelligence in a complex environment such as the International Space Station, in order to provide the best possible support to people in such conditions,” says Matthias Biniok, IBM’s lead Watson architect in Germany, explaining their interest in the project. For example, CIMON uses Watson AI to process text, speech and images, find specific information and knowledge, and interpret moods and feelings. Biniok adds: “These skills can be individually trained and enhanced within the context of their respective application. Artificial intelligence also makes particular use of artificial neural networks.”