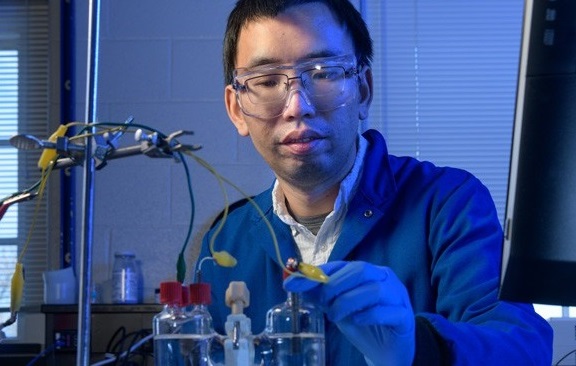 The idea of using hydrogen as the basis of a clean sustainable energy source has been a topic of conversation for decades. Hydrogen fuel, for example, doesn’t emit any carbon dioxide and is considered more sustainable than traditional fossil fuels. Hydrogen is an energy carrier that can be used to power fuel cells in transportation vehicles, buildings, or other infrastructure.

But the technology driving these innovations has faced serious challenges, chiefly because freeing hydrogen for these uses is produced mainly through processes that require fossil fuels and come with an environmental cost—carbon dioxide. Now, University of Delaware (UD) professor Feng Jiao has patented a process that may hold the key to producing greener hydrogen from water using electricity and a copper–titanium catalyst.

When Feng Jiao first joined the UD in 2010, his research program focused on the energy storage capability of batteries. “But we realized that batteries are an expensive technology for large-scale energy storage, so my lab began focusing on beneficial ways to use electricity instead,” Jiao said. “Chemical conversion is one way to do this.”

As the team tested different metals for the job, the researchers unexpectedly discovered that a copper–titanium alloy is among only a few non-precious, metal-based catalysts that can split water into hydrogen gas and oxygen. Both copper and titanium are considered inexpensive and relatively abundant when compared with precious metals, such as silver or platinum, typically suited for the job.

However, copper alone is not effective at producing hydrogen. But add some interesting chemistry—and a teeny bit of titanium—and a world of possibilities suddenly opens to create catalysts that pull their weight and serve the environment.

“With a little bit of titanium in it, the copper catalyst behaves about 100 times better than copper alone,” said the professor. This is because, when paired together, the two metals create uniquely active sites that help the hydrogen atoms strongly interact with the catalyst surface in a way that is comparable to the performance of much more expensive platinum-based catalysts.

Early results show that a copper-titanium catalyst can produce hydrogen energy from water at a rate more than two times higher than the current state-of-the-art platinum catalyst. Jiao’s electrochemical process can operate at near-room temperature, which increases the catalyst’s energy efficiency and can greatly lower the overall capital cost of the system. However, more work is needed in terms of scaling the process for commercial applications. If they can make it work, the savings would be big.