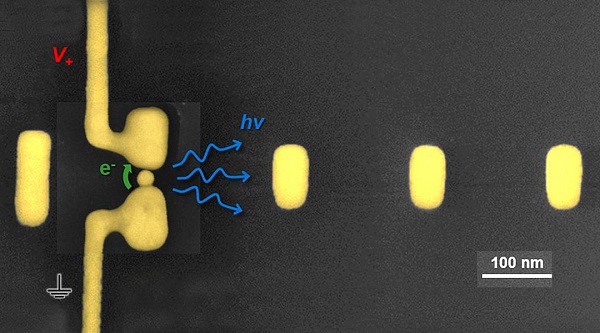 Almost 100 years ago, the two Japanese scientists Hidetsugu Yagi and Shintaro Uda invented a directional antenna for receiving or transmitting electromagnetic waves. Characteristic of the Yagi-Uda antenna is a dipole, which is a single transmitter or receiver element that contains opposite charges.

This dipole is given a directional effect by at least one or more appropriately arranged directors and reflectors. As a result, Yagi-Uda antennas are a key technology for efficiently transmitting information from one point to another using radio waves. They are best-known as rooftop television antennas but have also been used in radar, shortwave, and radio broadcasting.

The dipole in Yagi-Uda antennas has a length of almost half a wavelength of the radio waves to be transmitted or received. Wavelengths for radio, television, or radar transmit wavelengths in the range of 1-10 meters, while cell phones, WiFi, Bluetooth, GPS, and directional or satellite radio transmit waves in the microwave region, which are range from one meter to one millimeter. For extra small wavelengths, correspondingly small antennas are therefore required.

As with the miniaturization of any technology, building small antennas is a challenging task. But now, physicists from the University of Würzburg, Germany have successfully converted electrical signals into photons and radiated them in specific directions using an antenna that is only 800 nanometers in size. This means that directional waves that have a wavelength in the spectrum of light or infrared light can now be generated.

The idea behind the study was to send directional waves between different processor cores at the speed of light to increase the processing speed of computers. To enable antennas to operate with the very short wavelengths of visible light, such directional antennas had to be miniaturized to nanometer scale.

The Würzburg physicists generated directed infrared light using an electrically driven Yagi-Uda antenna made of gold, which was developed by the group.

According to team member Dr. René Kullock, it is simple in theory, as an AC voltage is applied that causes electrons in the metal to vibrate and the antennas to radiate electromagnetic waves, while reflectors and directors ensure a selective orientation.

However, applying the well-known technology to nanometer-scale antennas is technically very difficult. “Fighting with the laws of physics at the nanoscale was the biggest challenge,” explained Kullock.

“our structures have a gap size of just 1 nm, which means only three gold atoms are missing. So, having a precise enough structuring, an accurate placement of the particle and a big-enough yield were the biggest difficulties. And not blowing up everything at the end.”

The group bombarded high-purity gold crystals with gallium ions to cut out the antenna itself, including all reflectors, directors, and necessary connecting wires with appropriate precision. Next, the physicists positioned a gold nano particle in the active element to bridge one nanometer wire to the other.

“This gap is so narrow that electrons can cross it when voltage is applied using a process known as quantum tunneling,” said Kullock. This charge motion generates vibrations in the antenna, which are emitted in a specific direction thanks to the special arrangement of the reflectors and directors.

Further work has to be done before the new invention is ready to be used in practice. “We are currently integrating more robust light-emission mechanisms similar to the ones used in LEDs or OLEDs,” said Kullock. “But as our structures are so tiny, we have to go from conventional semiconductors to quantum dots and from organic films to a few molecules. These are entirely new challenges.

Furthermore, we are also working on the detection side of the equation, i.e., building Yagi-Uda like receivers to convert the light back into electrons and make it viable option for on-chip data communication.“