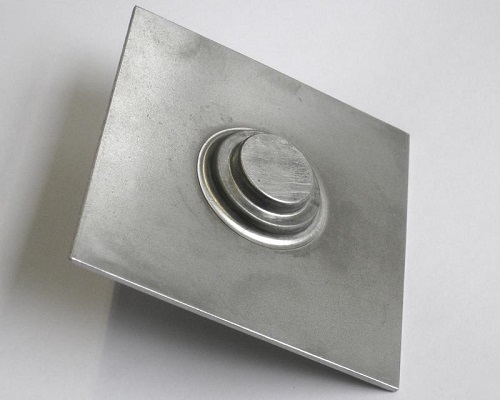 Hybrid compound forging is the first process that combines two lightweight construction approaches, namely creating a material bond between steel sheets and bulk parts, and employing different materials with different properties – such as lightweight aluminium and strong steel. In cooperation with the Institute of Welding and Machining (ISAF) of TU Clausthal, the Institut für Integrierte Produktion Hannover (IPH) is developing a novel forging process for lightweight car manufacturing.

The researchers’ idea is to form and join a steel sheet and a solid aluminium stud in one process step. In the past, the individual parts have been formed first and then joined in a second step, for example using stud welding. The idea of hybrid compound forging is to eliminate the subsequent joining step – and facilitate a faster and more efficient production of lightweight components. When designing the novel lightweight production process, IPH and ISAF have to meet two challenges: Since aluminium has a considerably lower melting point than steel, the joint forming process is more complicated.

Moreover, the mixing of steel and aluminium creates brittle intermetallic phases, a material bond which is not strong enough and thus unsuitable for car manufacture. For this reason, the researchers employ zinc-plated steel sheets and aluminium studs: Zinc firmly bonds to aluminium as well as to steel without creating brittle phases.

Within the scope of the research project “Hybrid Compound Forging”, the researchers’ task is to determine the most suitable process conditions – i.e. optimal temperature, pressure and speed for successfully forming and joining the two parts. They also try to identify the suitability of the novel process with respect to different types of sheet thicknesses and stud shapes. Another topic is to determine the joining zone’s capacity to withstand load as well as the machinability of the hybrid part after joining.