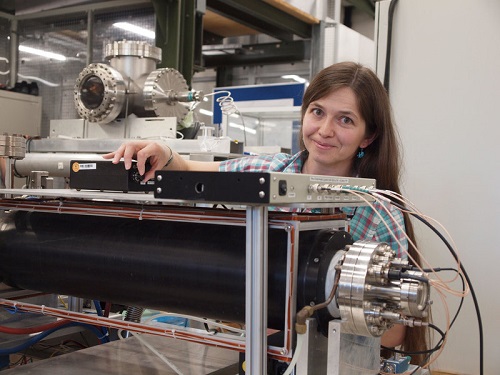 Phosphors have long been in daily use, e.g. in TV screens or PC monitors and in science for investigating plasmas and particle or antiparticle beams. It was hitherto not known, however, that the light emission due to electrons is much lower than due to positrons, their antiparticles. This was discovered by Dr. Eve Stenson at Max Planck Institute for Plasma Physics (IPP) while preparing for experiments with matter-antimatter plasmas.

“If antimatter were not so hard to come by, one could envision an era of low-voltage, high-brightness displays in which screens were excited not by electrons but by positrons”, is how Eve Stenson comments her discovery, albeit with a twinkle in her eye. “But this is, unfortunately, not feasible”. Nevertheless, there may be a future for positron-induced luminescence.

First it must be clarified, states Eve Stenson, why positrons excite phosphors much more strongly than equally fast electrons. Both electrons and positrons transfer their kinetic energy to the luminescent material on impact. Such collisions raise the electrons of the luminous matter from a lower to a higher energy level. When they drop back again, the energy released is emitted as light – the material luminesces at the impacted site.

In the case of an impacting positron, however, there is a second effect: After it has deposited its energy in the phosphors the positron annihilates with an electron, its antiparticle. This leaves a hole in the sea of electrons of the phosphor into which other electrons from higher energy levels can fall, thus giving rise to additional emission of light. This accounts for the higher light emission of positrons. “This bonus light could yield information about the material properties of the phosphor and the mechanism of luminescence”, states Eve Stenson. As she points out, although luminescent materials and phosphor screens have been in use for decades – in TV sets, displays, signposts, physical sensors or as nanoparticles in medicine – important physical details of their behaviour have not yet been clarified.

The different effects of electrons and positrons were discovered by Eve Stenson when calibrating the phosphor screen on a particle trap that can store either electrons or positrons. She was astonished to find that the two types of particles resulted in two completely different shapes of curves: Positrons with an energy of a few tens of electron volts generate in the zinc sulphide or zinc oxide phosphor screens she investigated as much light as electrons with several thousand electron volts. “In order to understand this, I suddenly found myself on an unscheduled detour from plasma physics deep into solid-state physics”. For she was confronted by the fact that the luminescence yielded by electrons and positrons had never been compared for low energies so far, although both kinds of particles were being routinely detected with luminescent screens.