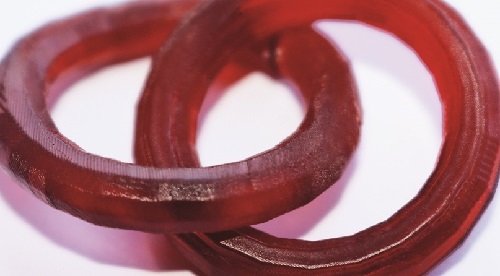 Stereolithography is one of the best-known processes for printing 3D plastic components. The method uses photolithographic light exposure that causes liquid resins to harden, layer by layer. However, this additive process has one significant disadvantage: it requires supports that the user must include in the design; construct during the process; and then laboriously remove from the product.

The Fraunhofer Institute for Laser Technology ILT is collaborating with the company Rapid Shape to develop an efficient alternative to this process. A liquid resin is still used and is applied layer by layer to a resin reservoir. Similar to other systems built by the German company, a LED light unit illuminates the liquid resin in the component’s layered geometry.

“Much like with a projector, an image is projected into the resin bath and the polymer hardens in the areas that are illuminated. The resin in other areas initially remains liquid,” explain Holger Leonards and Andreas Hoffmann, project managers at Fraunhofer ILT.

Supports were used up to now because the plastic structures, which are often delicate, would otherwise collapse.

“Users dislike these process-related supports because additional CAD preparation and time-consuming follow-up work delay the production process,” says Andreas Geitner, technical director at Rapid Shape. The process developed in cooperation between research and industry not only works without supports, it also enables components to be positioned in the entire build volume without being connected to the platform, as the project partners report.

“Furthermore, we can create 3D components directly in the build volume, anywhere we choose,” Holger Leonards explains. “The components no longer have to be built on platform.  Because the total build volume is being used more efficiently, each 3D printing job can create significantly more parts.”

The scientists from Aachen and their industrial partners are making use of hybrid technology: they solidify the liquid monomer photochemically by means of light, and thermally by means of cold.

“The material is applied warm, and then irreversibly cured by light,” says Leonards. “At the same time, the cooled installation space ensures that the thermoset component being created layer by layer freezes to form a block with the resin that has solidified like wax.”

The user can subsequently liquefy this at room temperature, so that the support material drains off. What remains are the 3D printed components that just need to be briefly cleaned and post-cured. The aim in future is for these steps to be automated in a process chain too.

While two curing procedures are used, the development stage process is called “TwoCure”. For this new type of 3D printing, the material and photochemical process were developed by Fraunhofer ILT, while the procedure and systems technology were successfully realized by Rapid Shape. The first prototype has already been built and should soon be ready for series production.