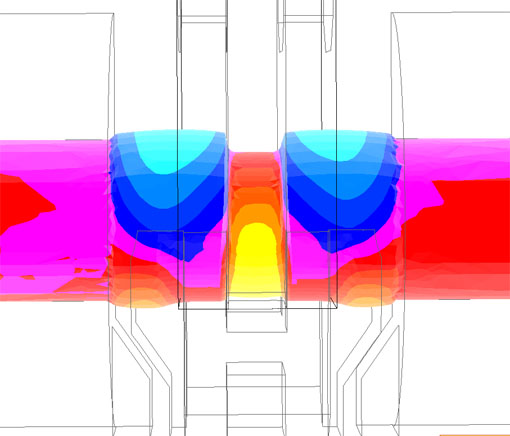 More than ten years ago a technology of forging crank shafts, the so called TR method, was developed at the Metal Forming Institute in Poznań, Poland. This technology provides very good results for cranks with shoulders of a shape close to an ellipse.

Problematic is that new constructions of crank shafts require large juts at the side of journals of main bearings that involve deep grooves in the stock material. Processed with the currently deployed machining method, this leads to a great amount of material waste causing an increase of machining costs. To avoid this inconvenience, an additional forging operation was introduced: An unsymmetrical pre-upsetting of the stock material. Several variants of this process and experimental analysis are possbile, but all of them would be very epensive.

Scienties from the Metal Forming Institute in Poznań joint together with the AGH University of Science and Technology in Krakow, Poland and developed a finite element model of the forging of crank shafts and simulated four variants. The scientists used two types of steel for the forging of the crank shafts and carried out axisymmetrical compression tests to determine the rheological models of these steels. To interpret the plastometric tests an inverse analysis, which minimizes the influence of disturbances such as the effect of friction or deformation heating, was performed in two steps.

The results of the collaborative study show that with the introduction of additional tools efficient forging of crank shafts with more complicated shapes of crank webs is possible. The analysis confirmed that the resistance to forming depends mainly on the degree of the constrain of the deformation zone. Furthermore, the results revealed that the more the shape resembles an upside-down triangle or polygon, the larger are the forming forces. This problem will be the topic of future work.