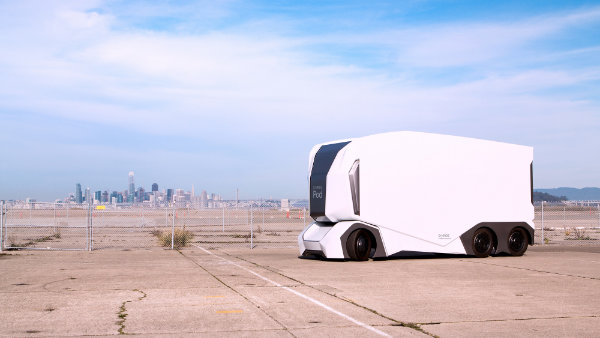 Flying cars have not been invented yet, which, if it were for „Back to the Future“, they would have appeared in 2015. The future is near, though: many companies are directing their attention to autonomous trucks and their possible uses with unmanned trucks currently being tested around the globe. Autonomous driving is an evolutionary process as we have seen in “Autonomous vehicles in logistics part 1: Opportunities and risks”, we have to take one step after the other.

Tesla founder, Elon Musk, would like the autopilot to be installed in the companies’ Semi Trucks as well, a component that already is a standard feature for Tesla cars. Serial production and delivery are scheduled to begin in 2020. Experts, however, doubt that the promised performance will be possible with today’s batteries.

Whereas, the T-POD made by the Swedish startup Einride is more progressed – it is a fully electric truck, with a range of up to 200 km (about 124 miles) and a loading capacity of 15 EUR pallets. The vehicle can drive up to 85 km/h (about 53 mph) and is monitored remotely. No driver’s cab is needed in the T-Pod enabling greater loading capacity and optimized energy consumption.

Logistics company DB Schenker has been using the autonomous T-Pod trucks on its premises in Sweden since November 2018. Recently, the Swedish Transportation Authority has given its approval for the use on public roads. Within the industrial area, where travel speeds are generally low, the T-Pod may now be operated on short public roads.

The main focus of research seems to be on autonomous cars, yet this is not the only field of transport expected to be transformed. There is a revolution going on at sea: the transition to autonomous vessels. China’s first autonomous cargo ship embarked on its maiden voyage in December 2019.

“Autonomous shipping is the future of the maritime industry. As disruptive as the smart phone, the smart ship will revolutionize the landscape of ship design and operations” estimates Mikael Makinen, President of Rolls-Royce Marine.

Researchers are well aware of new issues and questions raised by the introduction of autonomous shipping. However, the one liability which can be taken out of the equation is human beings. They cause accidents and costs.

From automated to autonomous aviation

Advanced computer vision and machine learning also enables major advances in the development of autonomous technologies in aircrafts. According to Airbus, in about ten years‘ time, there will be commercial, autonomously controlled flights with only one pilot present.

Boeing  have actually planned to have a small test aircraft flying completely autonomously in 2020 – from pushback to starting, rolling, launching, flying, landing, rolling back and parking. This is, of course, no longer expected after the 737 Max-crisis and with the current pandemic taking place. However, last year Boeing’s autonomous passenger air vehicle prototype completed a controlled takeoff, hover and landing during its first test flight.

Most passengers are not yet willing to travel on a completely unmanned autonomous passenger jet.  Although they may know that passenger planes today are mainly operated by autopilot, they also know that at least two pilots need to be present on board to monitor all processes, carry out take-off and landing and be responsible for communications.

When and whether drones for logistical purposes will establish is an interesting question. Perhaps, they will remain a specialist solution such as Zipline. Amazon, Google and DHL have been testing drones for several years, with UPS recently announcing it will collaborate with German drone-maker Wingcopter. Toyota also wants to enter the drone business; it has set out to achieve this by investing in the American drone developer Joby Aviation. While this type of autonomous vehicle will surely be established in a niche application field, it is still unlikely that autonomous drones will transport billions of packages or heavy loads through the air.

The automation of trains, however, is a logical step. This is because oncoming traffic is kept within limits and trains do not have to change lanes. There are projects worldwide to automate rail traffic, with self-driving trains already reality in some countries, autonomous underground railways and airport shuttles also already in operation.

In the area of autonomous public transport, China has made huge progress in recent years. China Railway has announced it will automate long-distance transport. On the line from Beijing to Zhangjiakou, trains of the Fuxing type will be able to travel autonomously at speeds of up to 350 km/h (about 217 mph) in the future. This would be a world record for driverless traffic – however, it initially would rely on human controllers.

In Europe, some buses are in service without drivers. Test and demonstration runs of autonomous buses as part of a German-Dutch project in March 2020 were successful and there are several other examples of autonomous bus tests.

In enclosed areas, autonomation is not an issue of the future. Autonomous vehicles can be controlled better in such enclosed areas and in these areas, they do not require road approval. In agriculture, tractors and other agricultural equipment are already operated autonomously; most applications are not highly complex solutions.

The German Fraunhofer Institute for Transportation and Infrastructure Systems, together with partners from across the industry, is testing autonomous trucks in defined operating zones. The plan is that when a truck driver arrives at the depot, the truck will drive to the loading ramp independently and, after loading, will park itself independently in the parking lot. The researchers are deliberately focusing first on automation zones, such as mines, truck depots, ports and company premises.

Volvo Trucks not only tests autonomous trucks but uses them, for example, in an underground ore mine in Sweden. In Norway , self-driving Volvo trucks transport limestone in a mine over a 5 km distance. The trucks are much safer and faster in blasting operations. This is because human drivers would usually have to wait until the mine is ventilated before the truck can be loaded.

With the cab less AXL concept truck, which has been tested in a gravel plant, Scania takes the next step in the development of autonomous trucks. The Scania trucks are steered and monitored by an intelligent control environment. According to the manufacturer, here the software is in many ways more important than the hardware.

Ports are a further field of research for Volvo Trucks. Vera is an autonomous electric vehicle that is designed to improve transport and logistics processes, especially over short distances. The vehicle will be used in a logistics center in Gothenburg, where it will transport goods from the logistics center to the port with a maximum speed of 40 km/h (about 25 mph).

Scheduled to run until 2021, MAN together with German transport and logistics company Hamburger Hafen und Logistik AG (HHLA) have an innovative project to develop automation solutions for road transport. A container terminal and a 70 km (about 43 miles) highway section have been chosen as the test environment. Two prototype trucks equipped with electronic automation systems will drive to the terminal fully automatically and finally handle the loading and unloading of the containers within the terminal.

Digitization of the infrastructure

To manage such sophisticated tasks, the trucks of the future must be connected with their surroundings and logistics processes need to be completely digitalized – this has clear advantages for the transport companies. The fact that around one third of all truck journeys are empty runs and considering waiting times at the loading and unloading stations or being stuck  in traffic jams also leaves room for more efficient logistics processes.

Sooner or later, clients should be able to identify and book cargo space gaps on the respective routes in real time, and freight exchanges will ensure efficient distribution. To achieve this, however, we need integrative solutions and the digital transformation for holistic networking across industry boundaries. This way, digitalization is radically changing the logistics industry – both technologically and strategically. But first we need to upgrade technologically, not only in the vehicles but the entire infrastructure must be adapted to ensure that autonomous vehicles can navigate safely.

Until then, our vehicles will continue to develop steadily. What began in the 50s with the first driver assistance system is still a fascinating technological journey with several opportunities and risks.