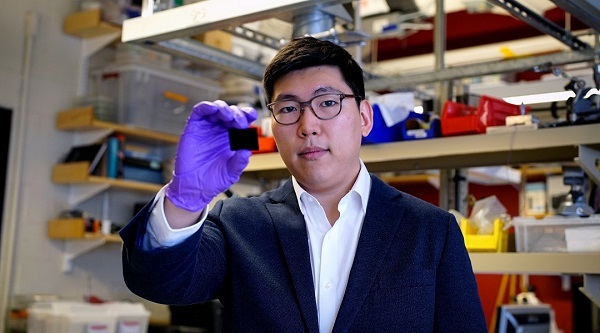 Fiber-reinforced polymers have become indispensable in aircraft construction because they are light, stiff, and strong. However, the larger the components become, the larger the tools for production must also be, which extends to the required ovens or pressure vessels called autoclaves. This calls for high technical and financial effort.

An airplane’s wing, for instance, consists of various layers of different composite materials that are stacked and molded into the desired shape. Correspondingly large ovens or autoclaves fuse the layers together creating a resilient, aerodynamic wing.

Currently, engineers at the Massachusetts Institute of Technology (MIT) report that they have overcome the need of the large ovens and autoclaves using a new way to produce such large, high-performance composite structures. Brian Wardle, professor of aeronautics and astronautics, postdoc Jeonyoon Lee, and Seth Kessler of Metis Design Corporation worked together on this production process that may even help to speed up manufacturing. Their findings were recently published in Advanced Materials Interfaces.

In 2015, the team found a way to bond the composite layers without an oven. To do this, the researchers wrapped the composites in an ultrathin film of carbon nanotubes, then used an electric current to generate heat, causing the materials to cure and fuse together. The team called this an “out-of-oven technique.”

With it, they produced composites as strong as the materials made in conventional airplane manufacturing ovens, but require only 1% of the energy. This problem solved, the researchers had to find an alternative to substitute the large, high-pressure autoclaves.

Every surface has a specific roughness — even very smooth surfaces. When two layers are put together, little amounts of air become trapped between them, which is the main source of voids and weaknesses in a composite. During the autoclave process, these cavities are pressed to the edges to remove them. The question therefore became: how can we could avoid this process?

Testing the approach, the researchers wrapped the layers in a second film of carbon nanotubes, to which they applied an electric current to heat it up. The resulting composite showed no voids and the production quality was equal to high-performance composites that are produced in a usual autoclave, according to the MIT researchers.

“More than 90% of aerospace composite structures are made with carbon fiber thermosetting composites, as we have studied here,” Wardle stated. “Our techniques, particularly the out-of-oven, have been shown to operate at the required ~ 400°C processing temperature for these thermoplastics.  The thermosets need only 180°C. So, we are excited that we can cover the breadth of existing and forward-looking advanced carbon fiber composites, and therefore can also cover wind and automotive applications as well.”

In their experiments, the team worked with small samples. They were large enough to show that the nanotube films are able to heat and pressurize materials to fuse the layers without voids. “We are in the process of scaling the technology,” says Wardle. To make this process viable for manufacturing wings and other components, the researchers will have to find ways to manufacture carbon nanotubes at a much larger scale.