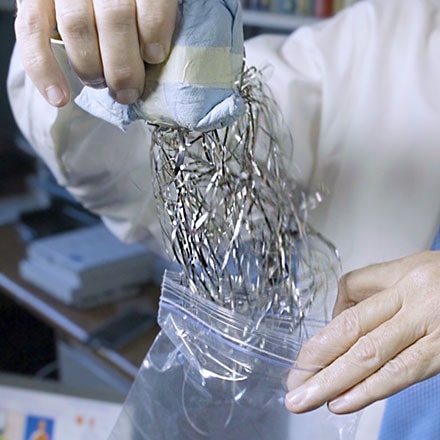 “The power of a motor depends on its speed,” said Prof. Michael McHenry. “When you rotate a motor at high speeds, the magnetic material switches at a higher frequency. Most magnetic steels, which is what most motors are made of, lose power at higher frequencies because they heat up.”

Current motors are typically made from silicon steels. MANCs provide an alternative to silicon steels and, because of their high resistivity, they do not heat up as much and can therefore spin at much higher speeds. “As a result, you can either shrink the size of the motor at a given power density or make a higher power motor at the same size,” McHenry said.

McHenry’s group, in collaboration with the National Energy Technology Laboratory (NETL), NASA Glenn Research Center and North Carolina State University, are designing a 2.5-kilowatt motor that weighs less than 2.5 kilograms. Most recently, they have benchmarked it at 6000 rotations per minute and are looking to build bigger ones that will spin even faster.

“Eventually we can go to higher speeds and higher powers with these designs,” McHenry said. “Right now we’re benchmarking a smaller motor, and then we’ll try and build bigger ones. Motors have aerospace, vehicle, and even vacuum cleaner applications—motors are important in any number of applications. In aggregate, motors represent a huge use of electrical power, so they are one area where efficiencies can make a big difference.”

To synthesize MANC materials, McHenry and his team rapidly solidify liquid metals at about a million degrees per second. Since they work at the lab scale, they look at 10 gram samples and screen them for their magnetic properties. Through various partnerships with partner research institutions and industry, they can take these MANCs and scale up the fabrication process for use in real-world applications.