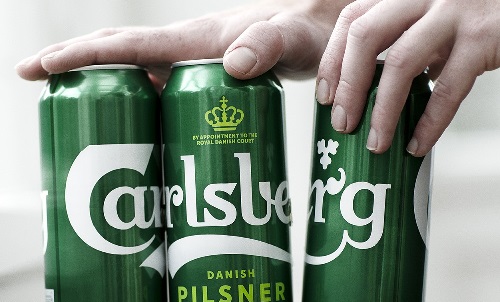 It was a well-planned world premiere. “One of our company goals is to strive for improvements, and with the launch we clearly show that we continue to live according to our founders’ mentality. Carlsberg’s Snap Pack will significantly reduce the amount of plastic waste and we look forward to offering consumers a better beer experience with less environmental impact,” explains Cees ‘t Hart, CEO of the Carlsberg Group. The brewery group expects that by dispensing with shrinkwrapping in its can packs, up to 76 % of plastic can be saved – in absolute figures this amounts to more than 1,200 tons per year, when fully rolled out. “Today, good brewing also means protecting the climate, nature and the environment,” explains Simon Boas Hoffmeyer, Sustainability Director at Carlsberg Group.

According to Carlsberg, in the run-up to the market launch, the Group invested heavily in market research in order to better understand the wishes and needs of its customers. The result: sustainability is one of the most important purchasing criteria for consumers. The Danish company then developed its sustainability programme “Together Towards Zero”. Its objectives include reducing carbon emissions by for example reducing waste and increasing recycling and reuse of materials.

A key criterion of the pack is convenience, and here the partners NMP Systems, a wholly owned subsidiary of KHS, and Carlsberg have worked to ensure consumer satisfaction. One of the benefits being less waste generated for consumers, and another being the benefit of perfectly aligned cans. Consumers can thus easily identify the product and find it on the shelf. This feature offers additional advantages at the point of sales. “Aligning the layout of each single can in this pack creates a so-called billboard effect. This effect brings a larger visual communication area for the brand displayed on the shelf”, explains Christoph Georg von Aichinger, Senior Sales Director at NMP Systems. The good handling and the easy separation of single cans provide better consumer convenience.

Carlsberg implements the sustainable packaging for cans as four and six packs including the carrying handle and will to begin with be selling it in the UK and Norway with Denmark, Carlsberg’s home country, following in early 2019.

The market launch was preceded by an intensive research and development phase. A particular challenge was the composition of the adhesive which bonds the filled cans with only a few adhesive dots to create a stable pack. The many hours of development have ensured that the individual cans can easily be separated with a single movement. “We have succeeded in developing an adhesive that works without damaging the printing ink and lacquer on the can”, says von Aichinger. In the coming months Carlsberg and NMP Systems will follow the initial market launch with great interest, to see how consumers and customers accept the innovation.