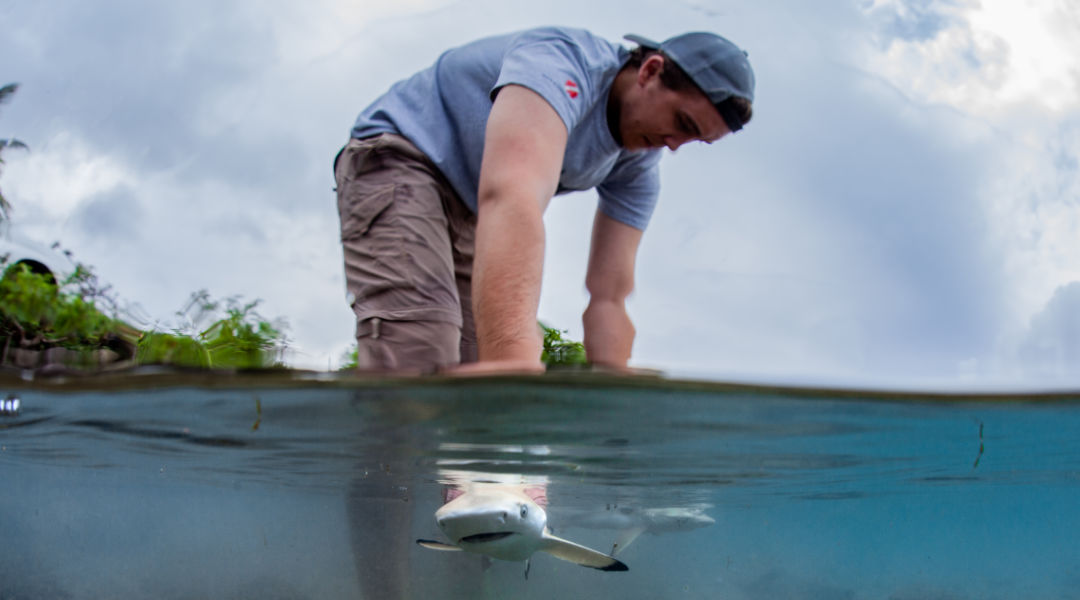 Climate and the oceans are very closely linked, and climate change is having serious effects on fragile marine ecosystems. As ocean waters warm and land ice melts, sea levels have begun to rise. Increasing sea temperatures also result in more evaporation, which creates additional moisture in the atmosphere and feeds heavy rainfalls, increasing the possibility of flooding.

At the same time, ocean warming reduces the amount of dissolved oxygen, and increases absorbed levels of carbon dioxide (CO2). The higher CO2 content causes oceans to become more acidic, which attacks and destroys the protective shell of corals and other microorganisms. They are a litmus test for the climate crisis’ effects at sea as ocean temperature is a critical variable in the survival of interconnected ecosystems with consequences for all marine life.

Marine biologist Ian Bouyoucos is interested in these very connections. He worked for the Australian Research Council Centre of Excellence for Coral Reef Studies and the Centre de Recherches Insulaires et Observatoire de l’Environnement in France. Now, he is a postdoctoral fellow in the Department of Biological Sciences at the Canadian University of Manitoba. Ian has been involved in shark research since 2008 and explains the impacts of global warming on marine life.

How does global warming affect life in the oceans?

Global warming is making the oceans warmer, among other phenomena, which affects life in the oceans in many ways. This ocean warming affects primary productivity and nutrient cycles, the global distribution and survival of marine organisms, and the amount and type of fish that are caught in fisheries, to name a few examples. The most striking example I’ve personally seen of how global warming affects life in the oceans is when massive parts of the Great Barrier Reef bleached and died off two summers in a row. There have been four mass bleaching events that have affected the Great Barrier Reef in my lifetime, and two of them happened in within the last five years.

Global warming is currently projected to continue along a high emission scenario, meaning that effective strategies to mitigate global warming are not in place. The oceans will continue to warm, acidify, decline in oxygen, and stratify in ways that are predicted to have the maximum effect on life in the oceans, relative to low emission scenarios.

Why do you study sharks? What is special about the blacktip reef shark?

I study sharks because I think they are among the most fascinating animals on the planet. From a conservation and management perspective, I work with sharks because they are one of the most threatened groups of vertebrates. Experimentally, sharks are quite interesting because they have such an ancient evolutionary lineage that studying their physiology can provide insight into the evolution of physiological systems in more recently evolved fishes.

The blacktip reef shark is a particularly interesting shark because they occur in some of the warmest marine ecosystems, like coral reefs, that are already feeling the heat of climate change. These sharks are widely distributed throughout the Indo-Pacific, including countries like French Polynesia, that have completely banned shark fishing, which is currently the biggest threat to sharks. The ability to study the blacktip reef shark in areas that are free of the pressure of fishing makes it an excellent model for understanding the challenges associated with environmental change for tropical reef sharks.

What are your most important findings?

The current refugia for sharks —  like shark sanctuaries, marine protected areas, etc. — are doing a good job, but they will not be immune to the effects of climate change. That is why it is important to understand how these animals are affected to inform their conservation and management.

My research is among the first in sharks to provide physiological and behavioral explanations for their temperature tolerance. We know that newborn sharks can rely on shallow habitats as nursery areas, but these habitats can get very hot, so we want to know how newborns can tolerate such high temperatures.

How does ocean warming affect humans?

We will invariably be affected by ocean warming because humans are totally dependent on the ocean. Two pertinent examples relate to how ocean warming will affect where humans can live and what we can eat. First, ocean warming makes earth less habitable for humans as sea level rises and we lose coastal habitats. Second, ocean warming is making fish smaller, making fish stocks smaller, and change where fish are caught; this becomes a food security problem.

Climate change is a very serious and complicated issue affecting humans and marine life and it is happening now. A lot of what I have referenced here is summarized in the most recent report on the ocean and earth’s ice-covered surface in a changing climate by the Intergovernmental Panel on Climate Change, which I highly recommend looking at!